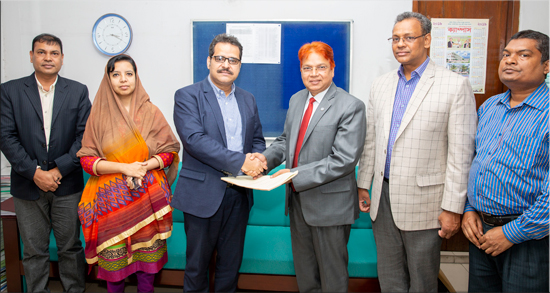 A Subsidiary Grant Agreement (SGA) was signed between Palli Karma-Sahayak Foundation (PKSF) and the Finance Division, Ministry of Finance, Government of Bangladesh (GoB) on 5 March 2019 for the ‘Pathways to Prosperity for Extremely Poor People (PPEPP)’ project.

The inception phase of the PPEPP project is expected to start from April 2019 after the signing of another MoU between PKSF and DFID. It will be implemented for sustained alleviation of poverty of extremely poor people including various disadvantaged communities of Bangladesh. The project targets 250,000 thousand extremely poor households in the poverty-stricken and climate-vulnerable northwestern region, southern coastal belt and haor area of Bangladesh.

PKSF, as the Core Implementing Partner, will implement Livelihood, Nutrition and Community Mobilization components of the project through selected Partner Organizations (POs). The other three components of the project — Market Development, Policy Advocacy and Life Cycle Grant Pilot — will be implemented by other stakeholders of PPEPP. Three issues — disaster and climate resilience, disability, and women’s empowerment leading to gender equality — will cut across the PKSF part of PPEPP components.

Subject to the progress and performance of the first phase, the project may have second phase from 2024-2028 to support additional 250,000 extreme poor households.