Browse: Home > The gracious visit of Her Majesty Queen Máxima of the Netherlands to PKSF

Her Majesty Queen Máxima of the Netherlands, who is also the United Nations Secretary General’s Special Advocate (UNSGSA) for Inclusive Finance for Development, visited the PKSF on November 16, 2015. It has been a great honour for the PKSF to have had the opportunity of receiving her Majesty. The Chairman and the Managing Director of the PKSF warmly welcomed her at the PKSF premises. 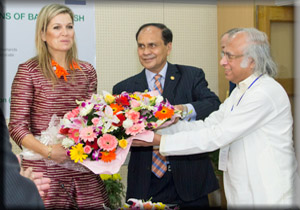 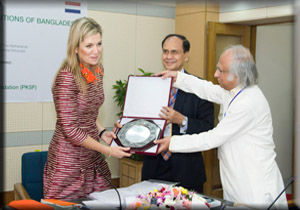 In honour of and as desired by her, the PKSF organized a roundtable on “The Future of Microfinance Institutions in Bangladesh.” Dr. Qazi Kholiquzzaman Ahmad, Chairman of the PKSF chaired the roundtable. The participants included PKSF MD Mr Md Abdul Karim, HE Dutch Ambassador in Bangladesh, HE Bangladesh Ambassador to The Netherlands, PKSF DMDs Mr Fazlul Kader, Dr Jashim Uddin and Mr Golam Touhid, President of ASA Mr S H Choudhury, ED of BRAC, Acting MD of Grameen Bank, EDs of a number of PKSF partner organisations, and a number of HM the Queen’s aides. 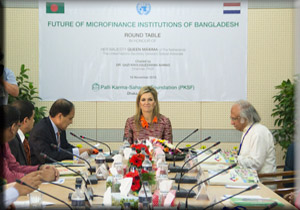 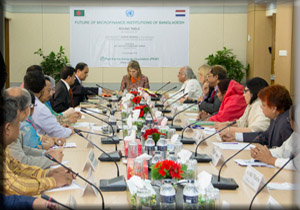