Access of low income people to finance for housing is a perpetual challenge in every country. It is more difficult in the urban areas. Lack of land tenure security and the high initial investment are the big hurdles. For financial institutions, it’s a very difficult task because of the terms and conditions permissible in matters of lending. Longer loan terms and absence of appropriate guarantee mechanisms are the main obstacles. The conventional microfinance system offers very little scope for funding in housing which relates to conventional mortgages. However, Palli Karma-Sahayak Foundation (PKSF) is presently implementing a project titled ‘Low Income Community Housing Support Project (LICHSP)’ in line with its mandate of inclusive and appropriate financing for sustainable development of people.

The LICHSP, co-funded by the World Bank and the Government of Bangladesh, is being jointly implemented by PKSF and the National Housing Authority (NHA). The objective of this project is to improve living conditions in selected low income and informal settlements in designated municipalities and city corporations in Bangladesh. The specific objective for the PKSF component of the project is to test suitable models for housing (micro-)finance that can be leveraged to meet the needs of the urban poor. This objective is to be achieved by enhancing security of tenure, improving infrastructure, and facilitating access to credit for improvements in shelter. The NHA is responsible for components related to community mobilization, enhancing security of tenure and improving tertiary infrastructure. PKSF, through its selected Partner Organisations (POs), is responsible for facilitating access to credit for shelter improvements, construction, and cluster development part, which is an independent component of the five-year project (October 2016 to December 2021).

The working areas of this project include both NHA and non-NHA towns. In the NHA towns, the NHA is responsible for selecting settlements for improving living condition of the poor by mobilising communities and constructing tertiary infrastructures. PKSF provides overall technical and monitoring support to its designated POs to implement the lending component at the field level. In the non-NHA areas, the POs are responsible for borrower assessment, as well as ensuring compliance to environmental safeguards, construction standards, and any other requirements of the credit line. In all cases, at any stage of the project, the POs possess full discretion to identify and assess borrowers and extend housing loans. 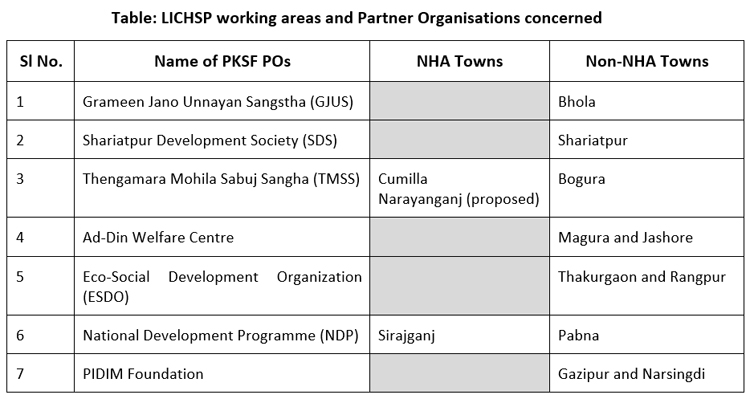 The Government of Bangladesh (GoB) requested the International Development Association (IDA) of the World Bank (WB) to make available a loan to the GoB amounting to Special Drawing Rights (SDR) 36,300,000 for the LICHSP. To facilitate implementation of the Part 3 of the project — Shelter Lending and Support, the GoB has allocated to PKSF US$ 18 million to realise two components: (i) on-grant component in an amount not to exceed the equivalent of US$ 2 million, and (ii) on-lend component in an amount of US$ 16 million.

A total of BDT 353 million in loans has been disbursed to seven POs by PKSF. The Project Management Unit (PMU) is closely monitoring the activities at the field level to ensure quality and progress of those. Five POs have disbursed a total of BDT 335.13 million to 1,162 borrowers for constructing new houses, repairing old houses and extending existing houses, as of 30 June 2019. The recovery rate for this loan service is 100 per cent at all levels.

Reflections from the World Bank

According to the World Bank Mission, PKSF activities under this project has been “Satisfactory” since its inception.

This project explores how to best design and provide affordable housing loans to low-income people for repairing and extending existing houses and constructing new ones. This housing loan service is the first of its kind in PKSF operations. The lessons so far learned from this project are:

Despite the vast opportunities for the housing loan product, there are some challenges, as mentioned below, that need attention.