Introduction
PKSF launched Promoting Agricultural Commercialization and Enterprises (PACE) project in January 2015. The project is jointly financed by PKSF and International Fund for Agricultural Development. The Financing Agreement of the project was signed between the People’s Republic of Bangladesh and International Fund for Agricultural Development (IFAD) on 11 December 2014. Subsequently, PKSF signed Subsidiary Loan and Grant Agreement (SLGA) with the Ministry of Finance, Government of Bangladesh on 18 January 2015 to implement the project.

Prior to the PACE Project, PKSF implemented three other IFAD funded projects, these are; i) Microfinance and Technical Supports (MFTS) Project, ii) Microfinance for Marginal and Small Farmers (MFMSF) Project and iii) Finance for Enterprise Development and Employment Creation (FEDEC) Project. All three projects were implemented very successfully and contributed significantly in poverty reduction and employment generation. The ‘Promoting Agricultural Commercialization and Enterprises (PACE) Project is designed on the basis of the experience and learning of the above-mentioned three projects to expedite further the process of poverty reduction by promoting microenterprises in the country. The project will be implemented in 6 years (2015-2020).

Goal and Objectives
The project goal is to enhance livelihoods (higher income from self-employment,business profit and wage employment, and food security) of the moderate and extreme poor (men and women) in a sustainable manner. The development objectives are to increase sales and incomes fromexisting and new microenterprises and to create new wage employment opportunities for extreme and moderate poor people.

Project Areas and Implementation Strategy
PACE project is being implemented all over Bangladesh through the countrywide network of Partner Organizations (POs) of PKSF. The PACE Project also adopted the strategy of combining financial and non-financial services to expedite the process of poverty reduction.

Project Participants
The target population of PACE project will include microentrepreneurs,i.e. who are borrowers of ME loan program, moderately poor and extremely poor persons. In terms of professional identities, the project will target marginal and small farmers involved in field crops, horticulture, fisheries, livestock production, non-farm microentrepreneurs, and professionals in service sectors. The project will extend financial services to additional 1,02,000 microentrempreneurs. Under the Value Chain Development of the project 3,00,00 project participants will receive non-financial services while 50,000 entrepreneurs will be benefitted under the component of Technology and product adaptation.

Budget
The cost of the project is USD 92.85 million, of which IFAD contribution will be USD 40.0 million. An amount of USD 0.36 million from Korean fund will be utilized under the project for setting up an e-platform to provide internet-based marketing support to the microentrepreneurs. Remaining USD 52.49 million will be provided by PKSF and its Partner Organizations (POs).

Expected Benefits
The main benefits of the project will be increase in sales due to the expansionof business, enhancement in productivity due to adoption of technologies and management practice, increased income by microentrepreneurs and other Value Chain actors, increased skills levels of workers, sustainable services, creation of wage employment and a conducive sector specific policy environment. 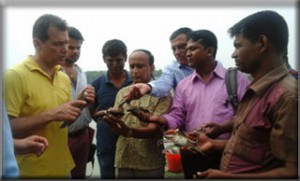 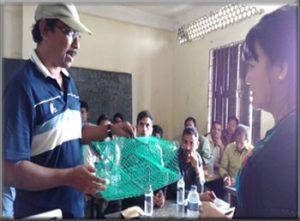 The crab culture is a potential economic activity in the coastal areas of Bangladesh. Considering increasing demand for crabs in the export market, PKSF has taken initiative to establish crab hatcheries in the coastal region of the country in order to increase the supply of crablets. Finding crab hatcheries in Vietnam very successful, PKSF decided to bring the technology of crab hatchery from that country. The transfer of crab hatchery technology will be done under ‘Promoting Agricultural Commercialization and Enterprises (PACE) Project’ jointly financed by PKSF and International Fund for Agricultural Development (IFAD).

PKSF conducted a feasibility study through Center for Education and Community Development (CECD), a Vietnamese development Organization from 25 November 2015 to 09 December 2015. A five member Vietnamese expert team conducted the study in three coastal districts, Cox’s Bazar, Shatkhira and Patuakhali. The expert team commented that the coastal area of Shatkhira is very suitable for crab hatchery establishment and recommended starting construction of hatchery there. Once the hatchery construction is completed, it will increase the supply of crablets and reduce the dependency on natural sources for crab fry collection. 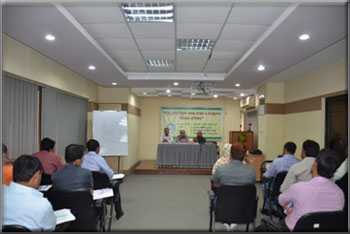 PKSF organized four training courses on Value Chain Project Design and Management during October-December, 2015 under Promoting Agricultural Commercialization and Enterprises (PACE) Project. The courses were organized at the training venue of PKSF and Institute of Microfinance (InM). A total of 86 officials of 43 Partner Organizations (PO) of PKSF took part in these courses. Apart from the resource persons of PKSF and InM, the expert from other organizations engaged in value chain development activities conducted sessions in the courses. The participants gained technical knowledge regarding sub-sector analysis, value chain project design and management from these training courses.

PACE project organized training courses in 12 batches on Reporting Formats developed for smooth monitoring of the progress of Microenterprise and Value Chain Development activities. As many as 239 officers from different POs participated in these trainings. 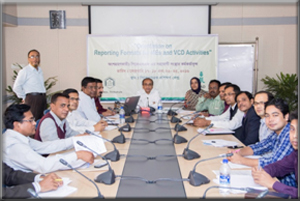 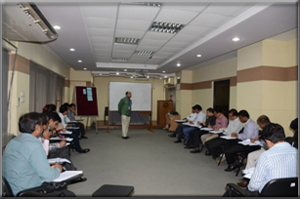 Workshops
PKSF and Development Alternatives Incorporated (DAI) jointly organized two Linkage Workshops in Jessore and Barisal on 13 December 2015 and 15 December 2015 respectively. The workshops were organized in the backdrop of signing MoU between these two organizations. To expand the financial and non-financial services among the beneficiaries of both USAID supported Agricultural Value Chain (AVC) project and PKSF financed programs of different MFIs was the main objective of the workshops. DAI has been implementing USAID supported Agricultural Value Chain (AVC) project in 20 southern districts of the country. Deputy Commissioner of Jessore Dr. Humayun Kabir and Deputy Director, Department of Agricultural Extension, Barisal Mr. Ramendranath Baroi presided over the workshop in their respective district. The financial products of MFIs and activities of AVC project were presented at the workshops. Mr. Akond Md. Rafiqul Islam, General Manager (Operations) and Mr. Habibur Rahman, Manager (Operations) attended the workshops on behalf of PKSF. Officials of DAI, selected MFIs and members of AVC project participated in the workshops. 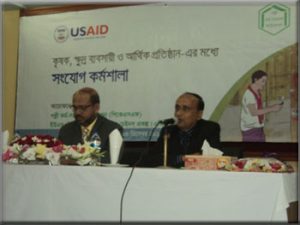 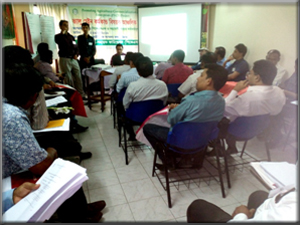 The project organized three regional workshops from 28-30 March 2016 in Dhaka, Chittagong and Rangpur regions for officers of Partner Organization (POs) working in the respective regions. As many as 87 officers from 44 POs attended these workshops. Concerned officers and Value Chain Specialist of PACE project conducted these workshops. 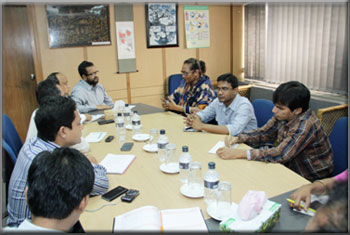 A discussion meeting with renowned fashion designer Bibi Russel was held at PKSF on 01 November 2015. The meeting was presided over by the Deputy Managing Director (Operations) Mr. Md. Fazlul Kader. Officials of PACE project participated in the meeting. Appreciating the interest of PKSF in promoting Jamdani products, Bibi Russel emphasized on the importance of improving efficiency in different stages of Jamdani production including diversification of designs. She expressed her interest to provide supports of any kind in the efforts of PKSF in developing Jamdani sub-sector. 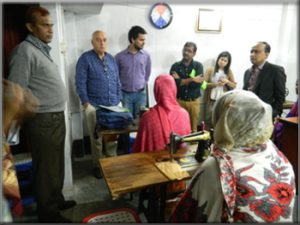 Baseline survey of PACE Project conducted
A baseline suvey of PACE Project was conducted to collect benchmark information of the project participants on various socio-economic indicators. A consulting firm named Development Technical Consultants Pvt. Ltd. (DTCL) appointed by PKSF carried out this survey. The survey team collected information and data of 1400 direct and 375 indirect beneficiaries of the Project from 16 districts of the country. The final report of the survey was submitted by DTCL in February 2016.

The benchmark information collected through this survey will be used to measure the changes of socio economic conditions of the Project participants at the middle and at the end of the Project. PKSF will conduct mid term outcome survey and the impact survey of the Project.

Inauguration of Crab Hatchery Production
PKSF established a crab hatchery in Shymnagar, Satkhira through its Partner Organization in order to expand the crab culture subsector, a potential export oriented subsector in the southern coastal region of the country. The crab hatchery was established under Promoting Agricultural Commercialization and Enterprises (PACE) project. PKSF completed the construction of the hatchery through its Partner Organization (PO) Nowabenki Gonomukhi Foundation (NGF). Dr. Qazi Kholikuzzaman Ahmad, Chairman, Governing Body of PKSF inaugurated this first ever success crab hatchery in Bangladesh. After inaugurating the hatchery, he released crablets produced in the hatchery in a nursery pond. Thousands of crab farmers will be benefited from this crab hatchery. Reducing dependency on natural sources like Sundarban, this crab hatchery having capacity to produce 3.2 million crablets per year, will play an important role in conserving biodiversity in the region as well. A Vietnamese development organization named ‘Center for Education and Community Development (CECD)’ provided all technical supports to transfer the crab hatchery technology from Vietnam to Bangladesh. In his inaugural speech, Dr. Qazi Kholikuzzaman Ahmad, Chairman, Governing Body of PKSF expressed his commitment to intensify PKSF’s endeavors toward the expansion of potential economic activities in the country. He also expressed his hope to establish small scale household level crab Hatchery for the betterment of crab farmers. 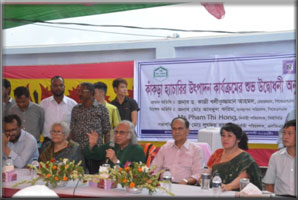 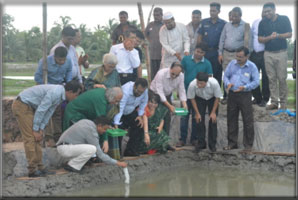 Supervision Mission of IFAD
IFAD supervision mission evaluated the progress of implementation of PACE project, jointly financed by PKSF and IFAD from August 30 to September 12, 2016. This was the 3rd Supervision mission of IFAD. A four-member team led by Mr. Peter Situ evaluated the project management and progress of field level activities of the project. Mission members visited microenterprises and value chain activities of PACE project in Jessore, Meherpur and Chuadunga districts. The IFAD representatives met and discuss with project participants and concerned officials of partner organizations during the visit. The mission expressed their satisfaction in overall progress of the project. 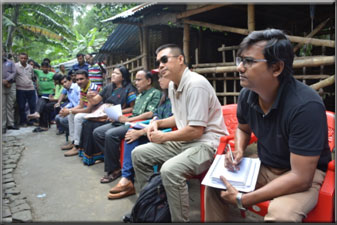