The UN-sponsored Sustainable Development Goals (SDGs) are aimed at ending extreme poverty for all people everywhere by 2030 (Goal 1). The SDGs also aim to end hunger, achieve food security and improved nutrition and promote sustainable agriculture (Goal 2). Bangladesh, a signatory of this UN declaration, is playing its parts in achieving these global goals. Bangladesh has made remarkable progress in human development indicators. Poverty rate have also demonstrated an impressive steady improvement, falling by about 1.7 percentage points per year. Despite these achievements, the HIES 2016 estimate suggests that about 21 million people live in extreme poverty in Bangladesh and around three quarters of them are in rural areas.

Palli Karma-Sahayak Foundation (PKSF) is an apex development agency established by the Government of Bangladesh for poverty alleviation through employment generation and holistic development of people. It has been working with extremely poor people since early 2002. Based on the decades of experience in extreme poverty interventions in Bangladesh, PKSF,  the Foreign, Commonwealth & Development Office (FCDO, formerly DFID) and European Union (EU) have jointly designed the ‘Pathways to Prosperity for Extremely poor people (PPEPP)’ project which will support extremely poor people to connect with mainstream economic growth and jobs. The project builds on earlier successful livelihoods graduation programmes (including Programmed Initiatives for Monga Eradication [PRIME], Chars Livelihood Programme [CLP], Economic Empowerment of the Poorest [EEP], Stimulating Household Improvements Resulting in Economic Empowerment [SHIREE] and Targeting the Ultra Poor [TUP]). This project extends a livelihoods graduation model towards ‘pathways out of poverty approach’ by adding fresh features to: address barriers that stop the poorest people pulling themselves out of poverty; make it more cost effective; and, ensure that it is sustained here after PPEPP’s eventual exit.

This comprehensive and integrated project will work towards creating pathways out of extreme poverty for the extremely poor households by addressing multidimensional aspects of poverty. It aims to deliver the results and higher level changes through following six interrelated and multidimensional components: Livelihoods (resilience building and value-chain development), Nutrition and Health, Community Mobilisation, Market Development, Policy Advocacy, and Life-Cycle Grant Pilot. The Project has three cross-cutting areas – Disability, Disaster and Climate Resilience, and Women’s Empowerment Leading to Gender Equality.

The project, jointly financed by the FCDO (formerly DFID) and European Union (EU), will be implemented from 2019 to 2025, with one year inception phase. PKSF is the main executing agency for the project, and will implement Livelihoods (resilience building and value-chain development), Nutrition and Health, and Community Mobilisation components for the organised households and targeted communities. PKSF has established a Project Implementation Unit (PIU) to implement the PKSF components of PPEPP.

The project will be implemented in selected districts and upazilas of the regions where the prevalence of extreme poverty is high and the decline over the last decade have been slower than in other areas. These are: North-west region, South-west coastal belt and the Haor area in the North-east region of Bangladesh. It will also cover some of the severe poverty pockets around the country.

The focus of PPEPP project shifts away from traditional ‘graduation’ to ‘pathways out of poverty’ by applying more tailored support package including grants and soft loans with a longer intervention time frame as in the case of PRIME. PPEPP evolves the poverty graduation model, building on what works while addressing its limitations. These include:

The Theory of change has built on this adjustment- shifts from ‘graduation’ to ‘pathways out of poverty’ approach. This will support more sustained income and human development gains, reduces vulnerability to shocks, and enables households to access a sustained upward trajectory. The Theory of Change for this project can be presented as four separate but connected causal pathways.

Figure. The Theory of Change for PPEPP project 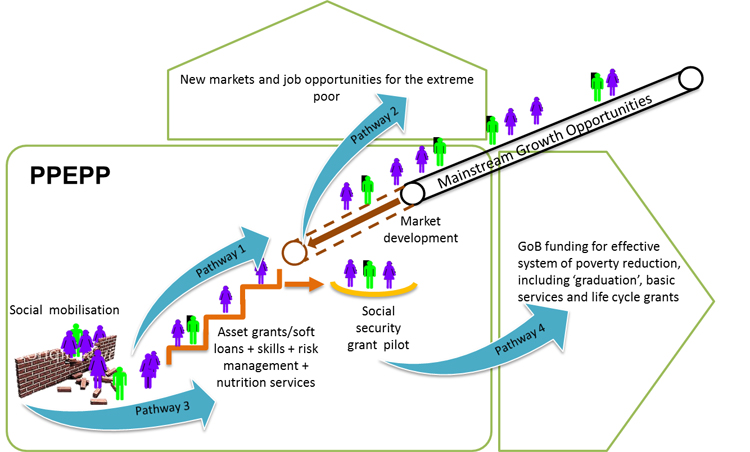 Pathway 1: An improved livelihood promotion model delivers more durable and transformative benefits for target households and enables them to access a sustained pathway out of poverty.

Pathway 3: Community mobilisation and national advocacy amplifies the voice of the extreme poor and marginal communities leading to increased Government of Bangladesh spending on basic services and wider access.

Pathway 4: A combination of new delivery channels and models, sustained national policy and advocacy and targeted investment will lead to a stronger, nationally funded system for extreme poverty reduction.

The project has six components and three cross-cutting issues.

Cross-cutting Issues
Three thematic areas which will be addressed as cross-cutting issues:

PKSF will establish a Project Implementation Unit (PIU) for implementation of its designated components including livelihoods, nutrition and community mobilization, preferably to be located at the premise of PKSF. The PIU will be staffed with diverse technical and professional personnel. PKSF led components will be delivered by around 20 Partner Organizations (POs) of PKSF. Each component will be delivered through a set of standard guidelines and policies.

A Project Management Unit (PMU) will also be established to provide support to FCDO in management and coordination of the overall project.

The project will be governed through an overarching Memorandum of Understanding (MoU) signed on 17th December 2018 between the Governments of Bangladesh and UK represented through ERD and DFID (currently FCDO) respectively. A Project Steering Committee (PSC), chaired by the Senior Secretary/Secretary of Financial Institutions Division of Ministry of Finance, will oversee and endorse the overall direction and policy of the project. A Project Coordination Committee (PCC) will oversee the operational implementation of the project.

The theory of change will be used as a framework to structure and adjust project monitoring and evaluation activities. The project will develop a results framework to track progress against key outputs, and outcomes. The M&E framework will draw on tools and methods from the Donor Coordination on Enterprise Development (DCED) Standard for results measurement and reporting. M&E service provider will be contracted through the FCDO’s Global Evaluation and Framework Agreement (GEFA) to deliver the evaluation in close collaboration with key implementing agencies. The M&E framework for the PPEPP project will aim to capture and track comparable and relevant sets of evaluation data so that Value for Money (VfM) questions can be answered more comprehensively.

A key priority for the inception phase will be to develop a household-level model and monitoring framework to measure ‘pathways out of poverty’ (and replace the current ‘graduation’ model). This will build on the lessons from previous programmes and experience of existing partners. A ‘Household Transformation Index (HTI)’ will be developed by PKSF to monitor the transition/journey of extremely poor households out of poverty, which will capture instances where positive incidences or negative shocks may accelerate or impede household progress. Furthermore, PKSF will develop a Results-Based Monitoring (RBM) system for the PKSF managed components. An Integrated Information System (IIT), containing large digital database on various socio-economic and other relevant information, will be developed and piloted during the inception phase.

PKSF will undertake independent baseline and follow-up (impact evaluation) studies on livelihoods, nutrition and community mobilization components and cross-cutting issues, which will help keeping the implementation on-track and attain results. PKSF will also undertake need-based action researches and short studies as and when needed. It may also pilot Randomized Control Trial (RCT) in limited scale.