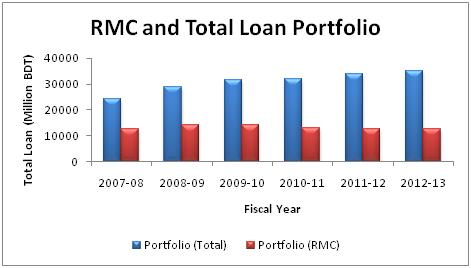 Rural Microcredit (RMC), the primary loan programme of PKSF  focuses broadly  on rural development. The  purpose of the programme is to provide credit in favor of off-farm activities with the objective of diversifying income opportunities of the rural poor. With gradual expansion of RMC, on-farm activities have also been incorporated.

It is difficult for the majority of the rural poor to access any formal financial organization. Since its inception, PKSF has relentlessly tried  to address this hurdle with the help of its Partner Organizations (POs). Under RMC, loans have been made available with the minimum required  formalities in the rural areas through the POs. The target group of RMC is the rural poor who own  arable land of less than 50 decimals or  total assets worth not more than the value of one acre of land. Under RMC,  the borrowers are provided funds used in  undertaking family-based Income Generating Activities (IGAs).

People from  similar economic strata tend  to have confidence and trust for  each other,  motivating  them to form  organized groups  This  solidarity approach usually make repaymenteasy and borrower-friendly. The administrative and related expenses of RMC implementing POs are covered by the service charges paid by the borrowers.