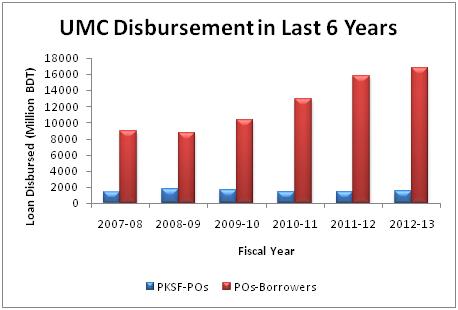 Poor people living in  metropolitan areas are defined as the urban poor. In 1999, PKSF  extended its microfinance services for the urban poor through Urban Microcredit (UMC) programme. Urban microcredit borrowers are distinct from the rural borrowers in a number of ways. They are the landless squatters living in slums or make-shift shacks. They usually take loans for small businesses.  In Bangladesh, the number of urban poor has  gradually increased in the last few years due to forced migration: a result oflimited employment opportunities in the rural agriculture sector, and repeated  occurrences of  natural disasters.  As urban poverty continues to increase urban life and development becomes drastically hindered. .

The extension of microfinance outreach is more feasible in urban areas than in rural areas because of lower transaction costs. . Women’s participation in UMC is also higher in comparison to RMC since they have  better access to the labor market and material resources, more freedom of movement, and greater influence in household decision-making.  Moreover, the urban poor are generally considered as safe borrowers since urban economic environment provides dynamic and diversified  economic opportunities.

Target members of UMC must be residents of urban or semi-urban localities for at least three years with no assets, and a monthly income of  BDT 4000-5000. People who have businesses, even on  a temporary basis, with a good record in handling  previous loans are also covered under UMC.