3rd Supervision Mission (30th August-12th September 2016):
IFAD supervision mission evaluated the progress of implementation of PACE project, jointly financed by PKSF and IFAD from August 30 to September 12, 2016. This was the 3rd Supervision mission of IFAD. A four-member team led by Mr. Peter Situ evaluated the project management and progress of field level activities of the project. Mission members visited microenterprises and value chain activities of PACE project in Jessore, Meherpur and Chuadunga districts. The IFAD representatives met and discuss with project participants and concerned officials of partner organizations during the visit. The mission expressed their satisfaction in overall progress of the project. 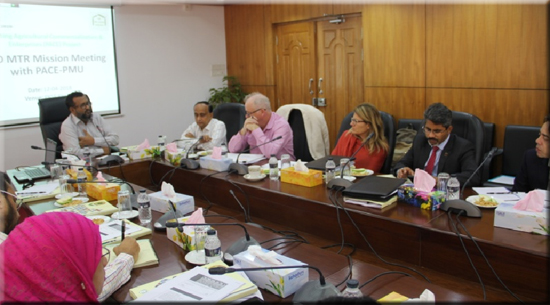 Training
PKSF organized four training courses on Value Chain Project Design and Management during October-December, 2015 under Promoting Agricultural Commercialization and Enterprises (PACE) Project. The courses were organized at the training venue of PKSF and Institute of Microfinance (InM). A total of 86 officials of 43 Partner Organizations (PO) of PKSF took part in these courses. Apart from the resource persons of PKSF and InM, the expert from other organizations engaged in value chain development activities conducted sessions in the courses. The participants gained technical knowledge regarding sub-sector analysis, value chain project design and management from these training courses.

PACE project organized training courses in 12 batches on Reporting Formats developed for smooth monitoring of the progress of Microenterprise and Value Chain Development activities. As many as 239 officers from different POs participated in these trainings.

Two training courses on ‘Microenterprise Management and Promotion of Private Businesses’ were organized for the officials of the PKSF during January to March quarter of 2018. Fifty officials of PKSF participated in these courses. Resource persons from PKSF and other specialized organizations conducted the sessions of this training course. The participants gained technical knowledge about managing and financing microenterprises from this training.

Besides, 1,119 microentrepreneurs were given training on Business Management and Accounts Keeping. The training courses were organized at the field level by the POs of PKSF.

A training course on ‘Business/sector Policy Analysis and Advocacy’ was organized from 13 to 16 May 2018 for the officials of PKSF. Twenty officials representing different levels of PKSF attended this training course organized at PKSF. The participants learned technical procedures of policy analysis and policy interventions for the development of various economic sub-sectors. Resource persons of different Universities and specialized organizations including PKSF conducted the session in the training course.

Training courses on Business Management, Business Models and Online Marketing & Branding was organized to provide technical knowledge of internet based marketing to the microentrepreneurs. As many as 150 microentrepreneurs participated in the training course organized in 6 batches at Farmers Training Center of SDI in Dhamrai, Dhaka and the Training Centre of UDPS in Bogura. Participants could learne about the various technical aspects of business management, business models and internet based marketing.

Workshops
PKSF and Development Alternatives Incorporated (DAI) jointly organized two Linkage Workshops in Jessore and Barisal on 13 December 2015 and 15 December 2015 respectively. The workshops were organized in the backdrop of signing MoU between these two organizations. To expand the financial and non-financial services among the beneficiaries of both USAID supported Agricultural Value Chain (AVC) project and PKSF financed programs of different MFIs was the main objective of the workshops. DAI has been implementing USAID supported Agricultural Value Chain (AVC) project in 20 southern districts of the country. Deputy Commissioner of Jessore Dr. Humayun Kabir and Deputy Director, Department of Agricultural Extension, Barisal Mr. Ramendranath Baroi presided over the workshop in their respective district. The financial products of MFIs and activities of AVC project were presented at the workshops. Mr. Akond Md. Rafiqul Islam, General Manager (Operations) and Mr. Habibur Rahman, Manager (Operations) attended the workshops on behalf of PKSF. Officials of DAI, selected MFIs and members of AVC project participated in the workshops. 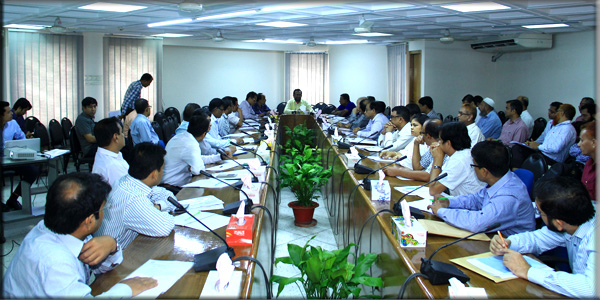 The project organized three regional workshops from 28-30 March 2016 in Dhaka, Chittagong and Rangpur regions for officers of Partner Organization (POs) working in the respective regions. As many as 87 officers from 44 POs attended these workshops. Concerned officers and Value Chain Specialist of PACE project conducted these workshops.

During January to March Quarter of 2018, four Regional Value Chain Review Workshops were organized in Chattagram, Dhaka, Jashore and Bogura regions of the country. The workshops participated by the partner organizations working in the respective regions discussed issues relating value chain project implementation and management. The concerned officer of PACE project moderated the workshops. 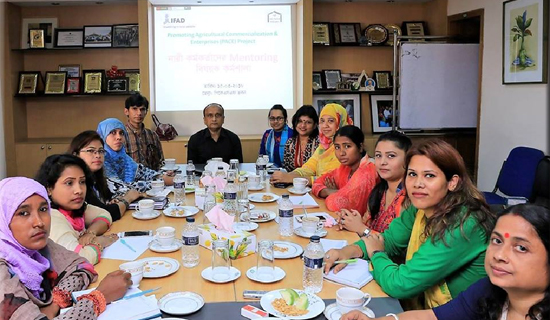 Dr. Akond Mohammad Rafiqul Islam, General Manager (Programme) and Project Coordinator of PACE project Chaired the session. Besides, Md. Habibur Rahman, Manager, PKSF and others officials of PKSF attended the workshop. This mentorship program will open a new platform for the women officials of the development field to enhance their leadership capabilities.

Microenterprise Program Review Workshop was held on 21st May 2018 at PKSF. The workshop was presided over by Mr. Fazlul Kader, Deputy Managing Director (Programme). Dr. Qazi Kholiquzzaman Ahmad, Chairman of PKSF’s Governing Body attended the workshop as the Chief Guest. He delivered speech mentioning valuable directions for the expansion of Microenterprise Programme. A total of 40 officials of 40 partner organizations (POs) of PKSF participated in the workshop. In addition to reviewing the existing microenterprise policy of PKSF, the participants exchanged their views to identify strategies for the promotion of microenterprises. Twenty officials of PKSF including Dr. Akond Md. Rafiqul Islam, General Manager (programme), PKSF & Project Coordinator of PACE project attended the workshop.

Feasibility Study to establish Crab Hatchery in Bangladesh
The crab culture is a potential economic activity in the coastal areas of Bangladesh. Considering increasing demand for crabs in the export market, PKSF has taken initiative to establish crab hatcheries in the coastal region of the country in order to increase the supply of Crablets. Finding crab hatcheries in Vietnam very successful, PKSF decided to bring the technology of crab hatchery from that country. The transfer of crab hatchery technology will be done under ‘Promoting Agricultural Commercialization and Enterprises (PACE) Project’ jointly financed by PKSF and International Fund for Agricultural Development (IFAD).

PKSF conducted a feasibility study through Centre for Education and Community Development (CECD), a Vietnamese development Organization from 25 November 2015 to 09 December 2015. A five-member Vietnamese expert team conducted the study in three coastal districts, Cox’s Bazar, Shatkhira and Patuakhali. The expert team commented that the coastal area of Shatkhira is very suitable for crab hatchery establishment and recommended starting construction of hatchery there. Once the hatchery construction is completed, it will increase the supply of Crablets and reduce the dependency on natural sources for crab fry collection.

Meeting with Bibi Russel
A discussion meeting with renowned fashion designer Bibi Russel was held at PKSF on 01 November 2015. The meeting was presided over by the Deputy Managing Director (Operations) Mr. Md. Fazlul Kader. Officials of PACE project participated in the meeting. Appreciating the interest of PKSF in promoting Jamdani products, Bibi Russel emphasized on the importance of improving efficiency in different stages of Jamdani production including diversification of designs. She expressed her interest to provide supports of any kind in the efforts of PKSF in developing Jamdani sub-sector.

Baseline survey of PACE Project conducted
A baseline survey of PACE Project was conducted to collect benchmark information of the project participants on various socio-economic indicators. A consulting firm named Development Technical Consultants Pvt. Ltd. (DTCL) appointed by PKSF carried out this survey. The survey team collected information and data of 1400 direct and 375 indirect beneficiaries of the Project from 16 districts of the country. The final report of the survey was submitted by DTCL in February 2016.

The benchmark information collected through this survey will be used to measure the changes of socio economic conditions of the Project participants at the middle and at the end of the Project. PKSF will conduct mid-term outcome survey and the impact survey of the Project.

Inauguration of Crab Hatchery Production
PKSF established a crab hatchery in Shyamnagar, Satkhira through its Partner Organization in order to expand the crab culture subsector, a potential export oriented subsector in the southern coastal region of the country. The crab hatchery was established under Promoting Agricultural Commercialization and Enterprises (PACE) project. PKSF completed the construction of the hatchery through its Partner Organization (PO) Nowabenki Gonomukhi Foundation (NGF). Dr. Qazi Kholikuzzaman Ahmad, Chairman, Governing Body of PKSF inaugurated this first ever success crab hatchery in Bangladesh. After inaugurating the hatchery, he released Crablets produced in the hatchery in a nursery pond. Thousands of crab farmers will be benefited from this crab hatchery. Reducing dependency on natural sources like Sundarban, this crab hatchery having capacity to produce 3.2 million Crablets per year, will play an important role in conserving biodiversity in the region as well. A Vietnamese development organization named ‘Center for Education and Community Development (CECD)’ provided all technical supports to transfer the crab hatchery technology from Vietnam to Bangladesh. In his inaugural speech, Dr. Qazi Kholikuzzaman Ahmad, Chairman, Governing Body of PKSF expressed his commitment to intensify PKSF’s endeavours toward the expansion of potential economic activities in the country. He also expressed his hope to establish small scale household level crab Hatchery for the betterment of crab farmers.

PKSF hosted Review meeting of IFAD funded projects at PKSF on 12th May 2018. Project Director and other officials of different IFAD supported projects participated in the meeting. IFAD Country Programme Manager Mr. Benoit Thierry presided over the meeting. The meeting discussed   issues relating to progress of implemention of the project and suggested future course of action to achieve projects objectives in stipulated time. Mr. Omar Zafor newly appointed Country Programme Manager of IFAD responsible for Bangladesh attended the meeting and took part in the discussion. It can be mentioned that a good number of IFAD supported project are being implemented in Bangladesh through PKSF, LGED and other department of various ministries. These projects are playing a vital role very important role in expediting poverty alleviation and in achieving SDGs. Among others, Project Coordinator of PACE project Dr. Akond Md. Rafiqul Islam, General Manager (Programme) attended the meeting and took part in the discussion.

Establishment of e-Platform for the marketing of ME products 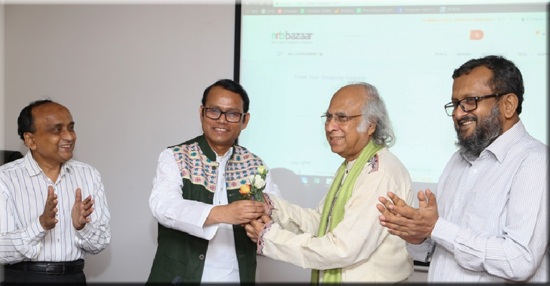 An e-platform has been established for branding and marketing of the products produced by microentrepreneurs. The platform has been established under the Korean Grant Fund of the PACE project. Apart from marketing and branding of ME products, this integrated e-platform will facilitate conducting online trainings for the microentrepreneurs and farmers. Besides, a software application is attached with the platform for strengthening Result Based Monitoring (RBM) of Microenterprise Program and value chain activities which will enable PKSF to generate real time reports.

Dr. Kholiquzzaman, honourable Chairman of PKSF’s governing body formally inaugurated the soft launching ‘Suponno’ (meaning quality products) an e-commerce service for microenterprises on 12th April 2018 by placing an online order for a ME product. In his inauguarl speech, Dr. Kholiquzzaman reiterated commitment of PKSF to continue its efforts for the promotion of microenterprises.