An official announcement was made on the successful unveiling of the full genome sequencing of four carp fishes and a dolphin of the Halda river at a virtual meeting on 16 November 2021. A research and training center with a hatchery at Raozan in Chattogram was also inaugurated.

Prof. Dr. Manzoorul Kibria and Prof. Dr. AMAM Zonaed Siddiki gave informative presentations on the subject at the virtual meeting. It is expected that their research will pave the way for conservation of pure genes of wild carps, and that the findings will be utilized to increase production of such unique fishes and contribute to the country’s economic progress. The relevant information on the genome sequencing has been submitted to the data bank of the National Center for Biotechnology Information (NCBI). After conducting necessary tests, the carp fishes of the Halda river can be declared as separate species. The Halda river-based activities are being implemented under PKSF’s ‘Promoting Agricultural Commercialization and Enterprises (PACE)’ project, financed by the International Fund for Agricultural Development (IFAD). The Financial Institutions Division (FID) of the Ministry of Finance is the executing agency of the project.

Dr. Nomita Halder ndc, Managing Director of PKSF, chaired the virtual event. She also inaugurated the research and training center with a hatchery.

In the welcome speech, Mr. Md. Fazlul Kader, Additional Managing Director-1 of PKSF said that the Halda is a very important river in Bangladesh due to its many special features. The government has recently declared this river as ‘Bangabandhu Fisheries Heritage’. This accomplishment has only been possible due to everyone’s combined effort. Here, PKSF has also played a vital role.The Halda originates in Bangladesh and flows in to the Bay of Bengal, within the Bangladeshi territories. The most important aspect is that the Halda is the only tidal river in the world where the wild carp fishes arrive from different channels to release eggs. The local people have been collecting eggs from this river and producing fry in the traditional way for centuries. This fast-growing river carp has a delicious flavor. The contribution of the Halda fishes to the national economy is around BDT 800 crore. If the maximum benefit could be scientifically derived from the amount of eggs that a brood fish releases in the breeding seasons during its lifetime, its potential value would be about BDT 250 crore. The river could at the same time be an important source of protein for the growing population of the country and generate employment opportunities for a large number of people. Through another sub-project under the PACE project, local farmers from the country’s south-west part were motivated to produce the distinctively featured fishes of Halda. And remarkable success was achieved in this case. Fishermen are showing a strong interest to cultivate these species due to their rapid growth. There is no risk of the Halda fishes losing their uniqueness since it is not possible for these fishes to mate with fishes from any other river. Preserving the brood stock of the Halda river in ex situ conservation method will help expand high quality carp production across the country.

Mr. Fazlul Kader also mentioned that a number of activities to protect the Halda’s fish breeding environment are being implemented by Integrated Development Foundation (IDF), a Partner Organization (PO) of PKSF. Local MPs along with upazila and district administrations are associated with the implementation of these activities. Ensuring protection of the river during the breeding season with cooperation from all has yielded highly positive results. The egg collection process has been advanced significantly as a result. The quantity of collected eggs has gone up to 25,000 kg. Due to tobacco cultivation in the upstream, many toxic substances were dumped into the river, creating an unfavorable environment for fish breeding. Tobacco production in the upstream areas have been stopped by introducing alternative cash crops. A significant progress has been made with the cooperation of all concerned in halting activities that were harmful to the conservation of the river environment.

In his speech, Mr. Fazlul Kader congratulated Dr. Manzoorul Kibria for his tireless efforts. PKSF has established the Halda Research Laboratory at Chittagong University, opening up new horizons for extensive research on the river environment, including the water quality. The eggs from Halda are sold for BDT 1.5 lac approximately. Since it is mixed with fish species with lower demands, the relevant traders are unable to as much profit from it as they should. Genome sequencing will help in the scientific branding of the Halda river’s fishes. In addition, this will pave the way for research on various issues, including the diagnosis of fish diseases.

Mr. Fazlul Kader expressed gratitude to former PKSF Managing Director Mr. Md. Abdul Karim, also a former Principal Secretary, for his assistance in initiating the implementation of the Halda river-based activities. He further stated that PKSF Chairman Dr. Qazi Kholiquzzaman Ahmad has been the highly supportive in implementing the initiatives and visited the Halda river-based activities. Besides, Dr QK Ahmad directed PKSF to include Halder operations as a core program of PKSF after the completion of the project’s tenure. Mr. Md. Fazlul Kader expressed his heartfelt gratitude to the scientists for their relentless research work on genome sequencing.

Prof. Dr. Manzoorul Kibria presented on the impacts of various PKSF activities on the improvement of the Halda river environment under the PACE project. Highlighting the unique features of the only tidal river of the world, he mentioned the biodiversity of the four carp species (Ruhi, Catla, Mrigel and Kalibaus) is found only in the Halda river. These four species may face extinction if the Halda is harmed in any way. Genome sequencing was essential to protect these species from extinction. According to the presentation, the main reasons for the decline in fish reproduction in the Halda are illegal fishing, industrial waste dumping, tobacco cultivation in upstream lands, destroying river bends, construction of rubber dam sluice gates, illegal extraction of water and sand etc. Various activities have been implemented to improve the river environment including guarding the river with the help of volunteers, introduction of alternative cash crops for tobacco cultivators and prevention of illegal fishing nets by providing necessary assistance (speedboats, solar-powered boats, manpower) to the local administrations. As a result, favorable environment for fish breeding is being restored in the Halda. Prof. Dr. Manzoorul Kibria highly appreciated PKSF for its outstanding contribution in implementing all of these activities.

Dr. AMAM Zonaed Siddiki, a Professor of Chittagong Veterinary and Animal Science University, who headed the research team, gave a presentation on the genome sequencing research of four carp fishes and the Gangetic dolphin found in the Halda. He also opined that the data from this genome sequencing could be used by future researchers as reference.

Dr. Akond Md. Rafiqul Islam, Senior General Manager of PKSF and Project Coordinator of PACE mentioned that Bangladesh’s global image has been brighter as a result of this research. He thanked IFAD, the financing agency of the PACE project, for assisting PKSF in implementing these activities that open up such new horizons. He also commented that the implementation of the Halda-based activities by PKSF has created awareness on river protection at all levels. The positive aspects of PKSF’s various activities have already encouraged the policymakers. In response, the government has formed a national task force comprising various ministries and relevant agencies.

In the concluding speech, PKSF Managing Director Dr. Nomita Halder ndc thanked all concerned for implementing various activities surrounding the Halda. She assured PKSF’s continuous support in addressing various risks and challenges to protect the ecosystem of the Halda, the only natural breeding ground for carp fishes in the country. 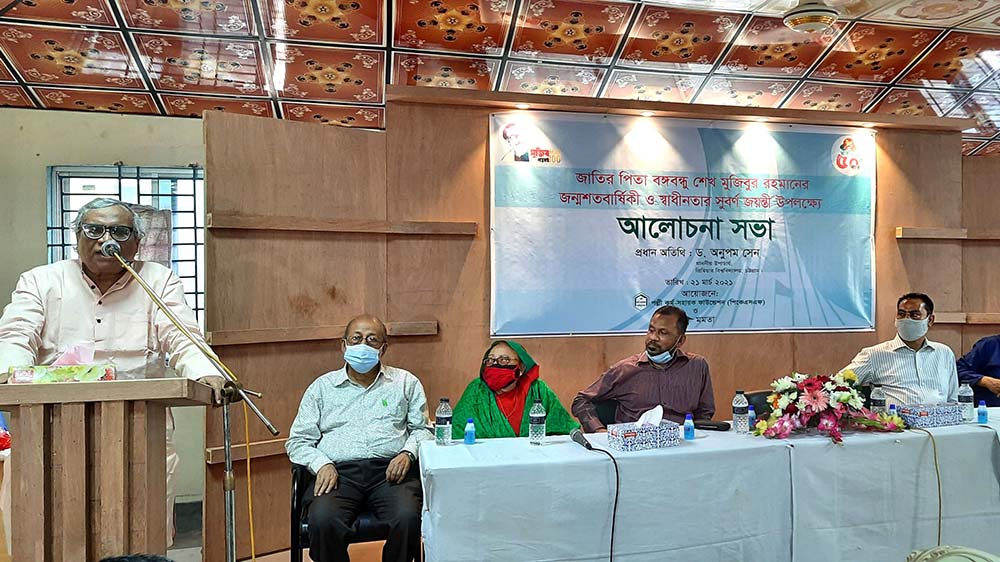 PKSF Organizes a Seminar on ‘Equality and Inequality’