For the Sake of Development of Those in Need
PKSF Managing Director braves heat, communication hurdles to visit hard-to-reach areas 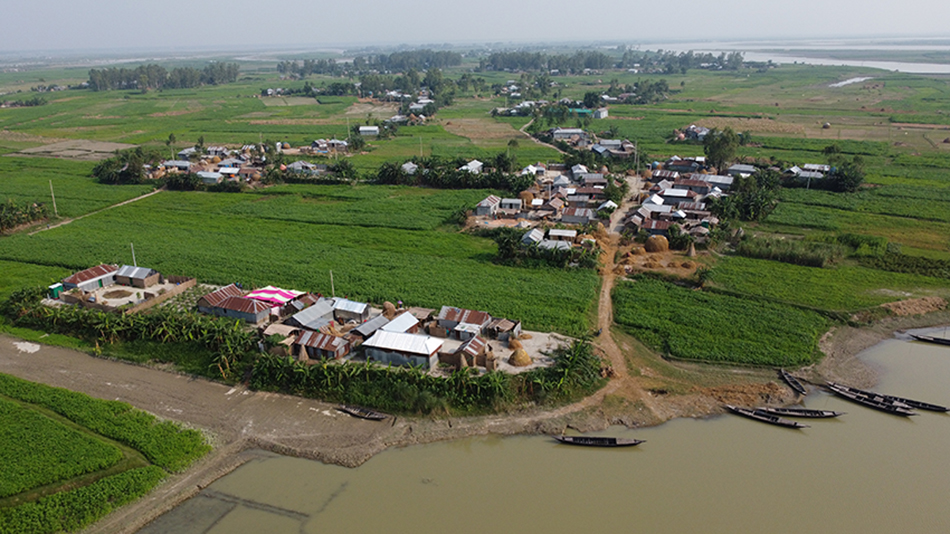 Cut off from the mainland by the mighty Jamuna River, Shildaha is a charland formed not so long ago. In the dynamics of erosion and accretion of the river, the char has sustained about 10-15 floods, according to locals, eventually to become a human habitat, which however has no communication infrastructure, no healthcare facilities and a barely functional educational institute. A handful of horse-drawn carts are the only mode of transportation found there. Formal financial services are non-existent. 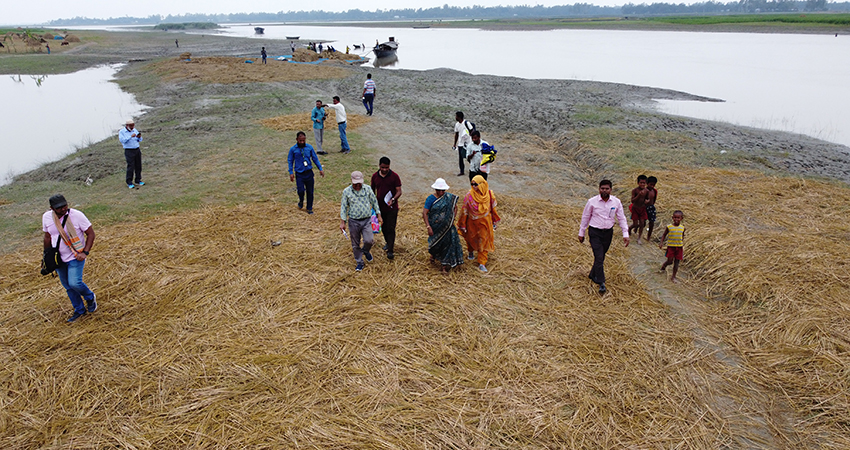 This remote, hard-to-reach charland in Islampur upazila of Jamalpur district is one of the areas that PKSF Managing Director Dr Nomita Halder NDC visited during a three-day official tour in the region from 28-30 May 2022. She was leading a PKSF team comprising General Manager Dr AKM Nuruzzaman, Deputy General Manager Salina Sharif, Manager Suhas Shankar Chowdhury, Deputy Managers Mamun Ur Rashid and Md Mahmuduzzaman and other officials. 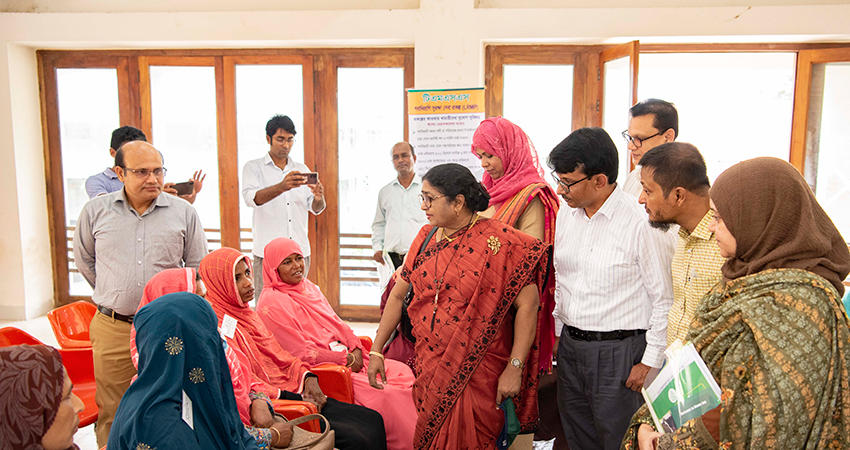 She began the tour by visiting a training program for livestock farmers at Madhupur upazila in Tangail district. She talked with the trainees who received different services under the Strengthening Resilience of Livestock Farmers through Risk Reducing Services project (LRMP in short), supported by the Swiss Agency for Development and Cooperation (SDC). TMSS, a Partner Organization (PO) of PKSF is implementing the project in the area. The LRMP, being implemented in 39 districts through 15 POs, aims to improve capacity and knowledge of livestock farmers on good farming practices through training, vaccination camps etc to reduce morbidity and mortality risks for livestock, and to encourage farmers to invest more in livestock rearing. It also works to improve the capacity of different stakeholders on risk mitigation services for the livestock sector in the country.

Dr Halder and her entourage then went to Jamalpur and visited a training center run by Eco Social Development Organization (ESDO), another PO of PKSF. She highly praised the way vocational training on different trades was being conducted for unemployed youths. 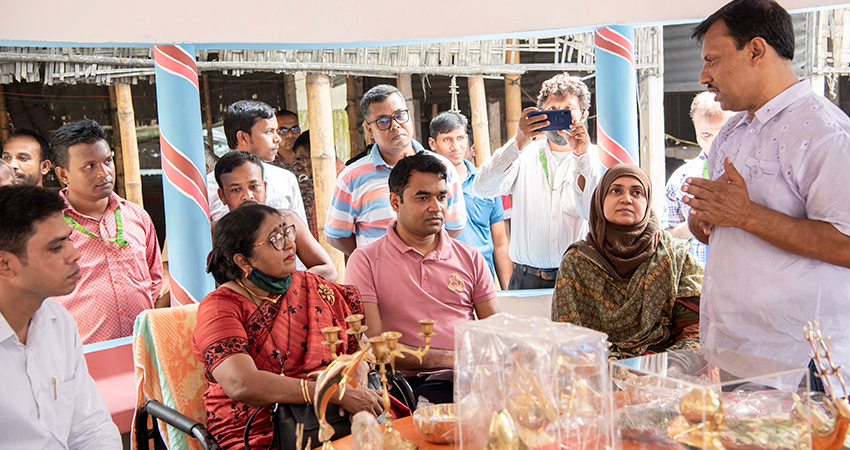 The next destination was the district’s Islampur upazila, one of the worst poverty-stricken areas of the country. Her first stop was Kasaripara, a neighborhood of bell metal craftsmen. PKSF, through its Promoting Agricultural Commercialization and Enterprises (PACE) project, is making an intervention there to improve the situation of the once-an-aristocratic craft that is now struggling to exist. She inspected their workshops and pledged to extend all necessary cooperation to provide modern machineries, necessary training, required financial assistance and market linkage support to revive the bell metal enterprises there.

From there, the PKSF team started towards Shildaha Char. After hours of journey by car, boat, horse-drawn carts and on foot, Dr Halder and her team reached a cluster of houses that stood on a plinth raised quite a few feet above the ground level. A group of women received them with cheerful claps. This was one of the many clusters of houses the plinths of which have been raised above the historically highest flood level under a PKSF project titled Extended Community Climate Change Project – Flood (ECCCP-Flood), financed by the Green Climate Fund (GCF).

Defying sweltering heat and barely walkable, uneven dirt roads, the PKSF Managing Director walked around the charland to see for herself the quality and effectiveness of ECCCP-Flood interventions. She spoke to the project participants there and expressed satisfaction with what the project had accomplished there already.

The day’s journey ended with a brief trip to Unnayan Sangha, a local NGO showing promise of expanding their operations to serve a greater number of people in need. 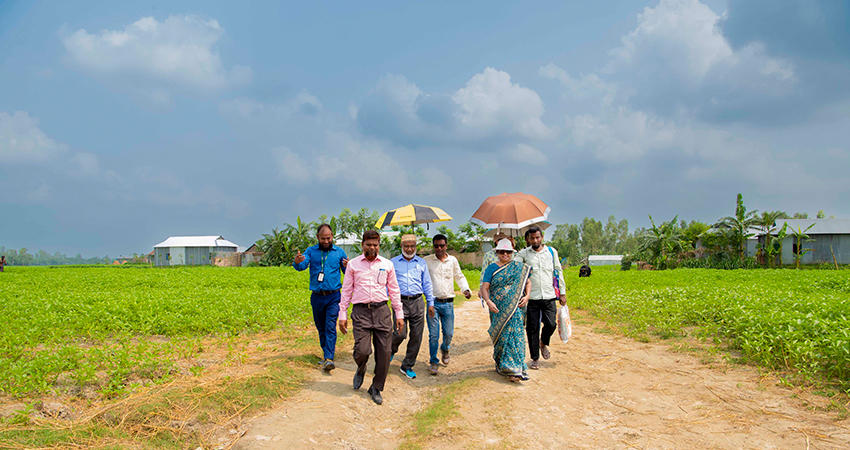 The next day, the PKSF team started for an even farther charland – Kodalkati, located in Kurgiram district’s Char Rajibpur upazila. This upazila recently made headlines for having the highest prevalence of poverty with almost 79 percent of people there living below poverty line, according to a recent study of Bangladesh Bureau of Statistics. Kodalkati is one of the newly formed charlands in the Jamuna basin where humans have started to inhabit. Though most of the char inhabitants struggle every day to make ends meet, they had broad smiles on their faces as they welcomed the PKSF delegation. They were happy that they no longer had to worry about floods destroying their homes and assets and displacing them, thanks to the plinth-raising interventions under ECCCP-Flood. After a meeting with a group of women in the Adarshapara neighborhood, Dr Halder said she was delighted to see a burst of confidence among the women. “They are poor but their eyes were gleaming with dreams of a better tomorrow,” said Dr Halder while staring at the charland disappearing into the horizon as her boat was leaving for the mainland. 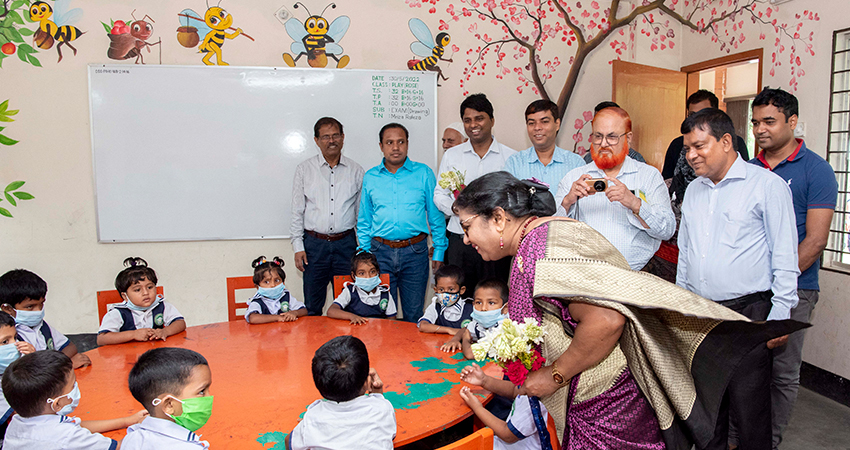 On the third day of her tour, she visited different activities of Society for Social Service (SSS), a PO of PKSF, in Tangail. She held meetings with SSS officials and visited a school for underprivileged children and a ‘Safe Home’ for children born in a local brothel. She was full of praises for the humanitarian interventions SSS was making.

Before concluding the tour on 30 May 2022, she participated as the Chief Guest in a program titled “Development Dialogue: Tangail District” organized by the district administration of Tangail. Apart from officials of the local administration, representatives of all NGOs working in Tangail attended the meeting and exchanged views.

Earlier on 28 May 2022, she graced as the Chief Guest a similar event titled “Development Dialogue: Jamalpur District”. Chaired by Deputy Commissioner Mursheda Zaman, the Dialogue was attended by top officials and representatives of development organizations working in the district. 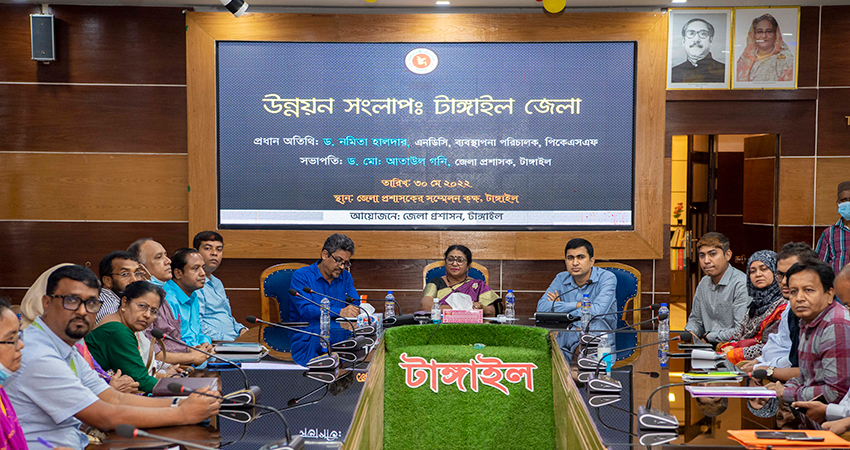 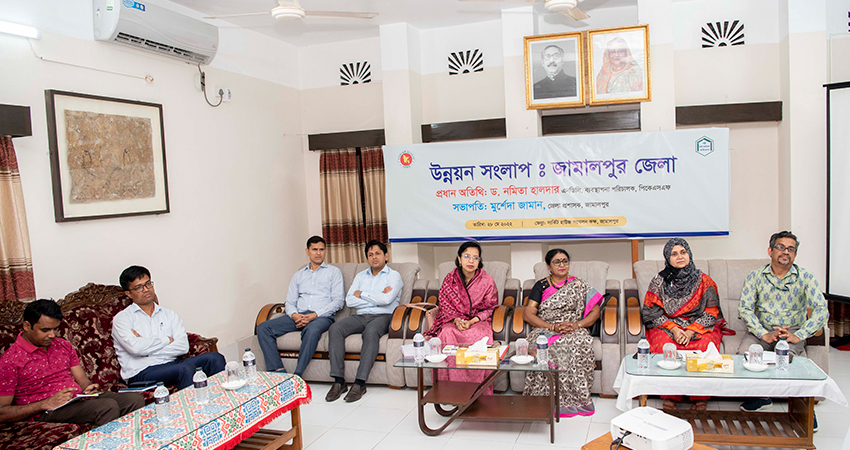 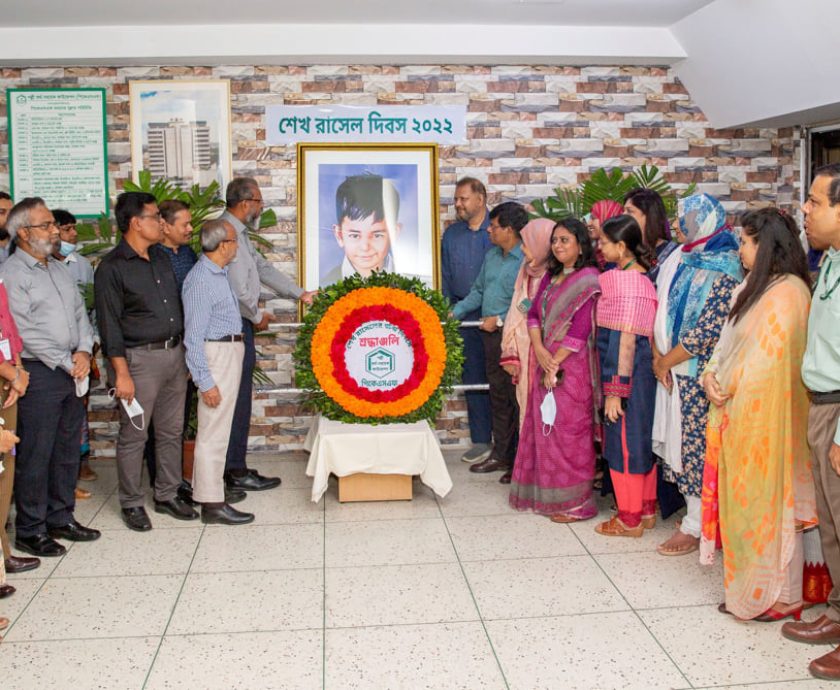